Lady in the Fog 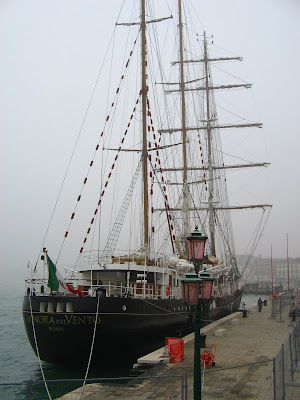 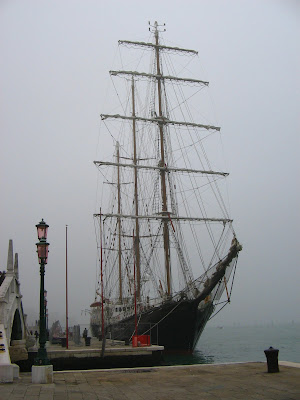 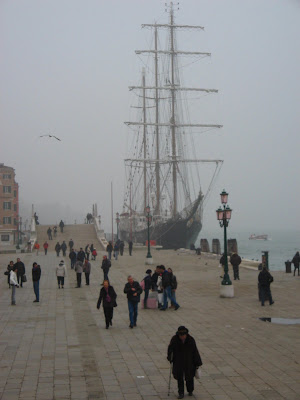 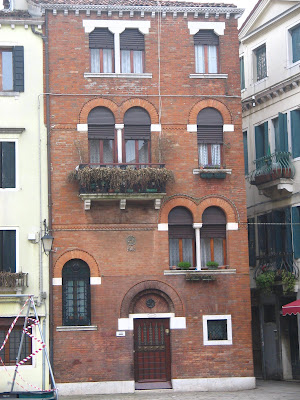 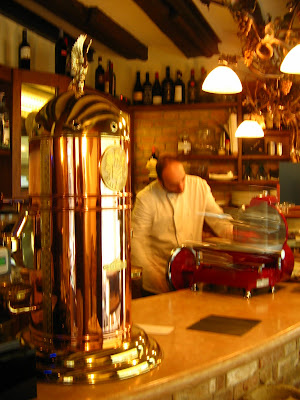 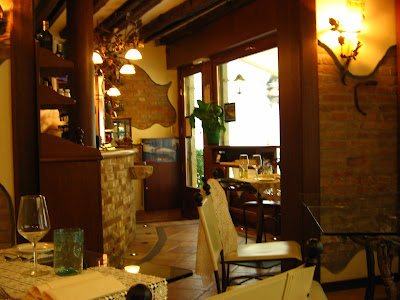 The Osteria ae Spezia is both beautiful and quiet.

It lurks between the Greci and the Arsenale and, as it is that hour between the end of lunch and the beginning of evening meals, the small and elegant room is empty.

I ask for "tramezzini," my favorite Venice snack - a thick high-piled juicy half-sandwich of many different fillings, say shrimp and mushrooms, or sliced ham and hard-boiled egg. When the counter man syas that they are out, I ask what I could have instead. He rattles off something about meats and cheese and bread in rapid-fire Italian and I quickly, if not entirely sure, agree.

I take a table with my back to the ample window so the light will afford my reading.

After, an unusually large tea cup of machiatto cafe. Wow! How deliscious it all is.

Afternoons are often taken with friends over lunch, but when they are not I am happy to be The Wandering Jew.

At the Teatro Fondamente Nove, I had only to ring the intercom bell and Matteo appeared full of good cheer to take me inside and show me the stage and the seating for 150 paying customers. This weekend they will have a New Dance Festival, but it seemed to me a great place to do a run of "Shylock" some day.

On the Riva della Schiavone, in the fog and looking out to the open lagoon, was berthed the magnificent "Signora della Vento" - The Lady of the Wind, a 3-masted schooner out of Rome.

In one day, in spite of the abscence now of large numbers of tourists, there must have been 10,000 photos taken.
Posted by David Berner at 2:57 AM 2 comments: Links to this post 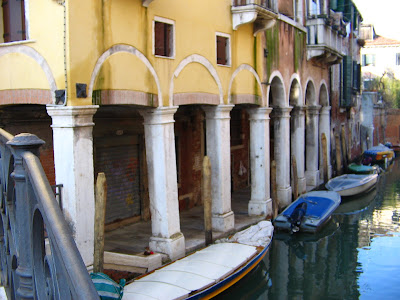 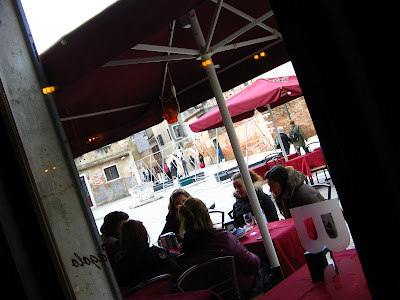 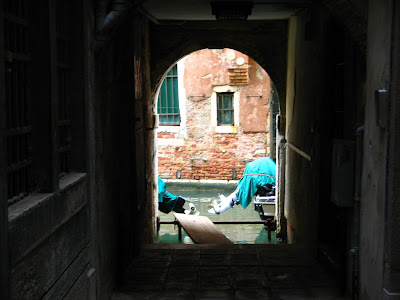 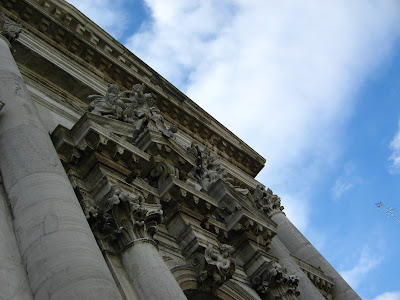 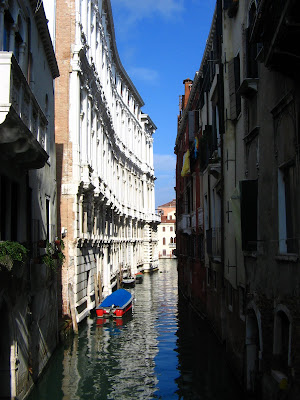 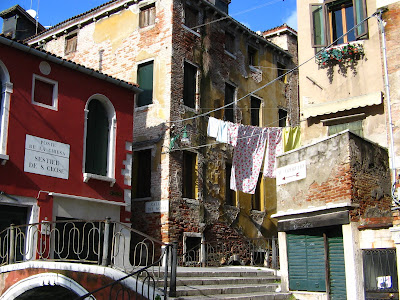 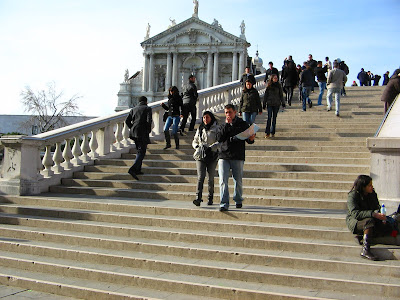 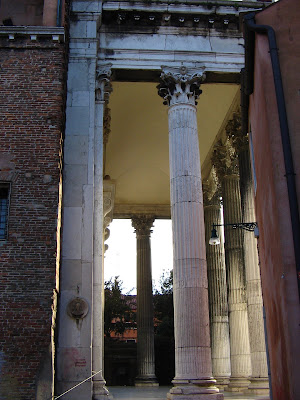 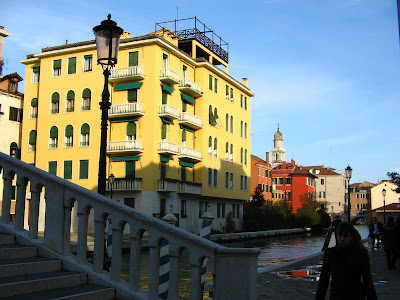 It is true that Venice is sinking, but not in the way that people always suggest when I say I am coming over here. It is not the water that is drowning this glorious unique city, but greed and abandonment.

There is a neighbourhood where I rented an apartment in May of 2000 and 2001. On MOnday, I stood on a corner talking to a Venetian friend who has worked his whole life making iron ornaments and fixtures for doors and balconies and windows. He pointed out to me the fruit and vegetable store where every morning I used to buy fresh strawberries for my breakfast. It is closed. Next door, the milk store. Closed. Then the butcher, closed.

The elderly barber on the Strada Nova, who reminded me so much of John, the barber, on West Broadway and Bayswater in Vancouver - he is gone. Years ago, a "regular" here told me that his brother lived at 33d and Fraser.

In the place of these real and necessary shops and serves there are stores hawking "Venetian" masks, copied and mass-produced in Asia, stores selling purses and wallets and T-shirts.

When the world ends, it will not be with a bang, but with a blizzard of T-shirts.

The Commune de Venezia - City Hall - protests that it has no money and that it has no power to scotch this very precipitous erosion. Like most politicians, they are liars and thieves.

In spite of all these complains and worries - and what is life without our daily deliveryu of complaints and worries? - Venice continues to be Venice.

In these photos, one sees a taste of two of the city's quieter "sestiere" or districts. Paris has its arrondisements and Venice has its six sestiere.

Posted by David Berner at 4:19 AM No comments: Links to this post 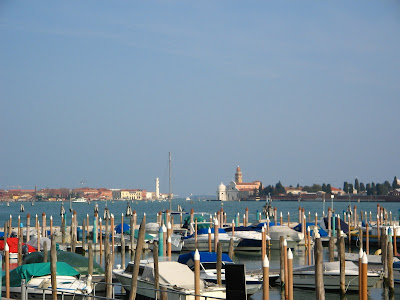 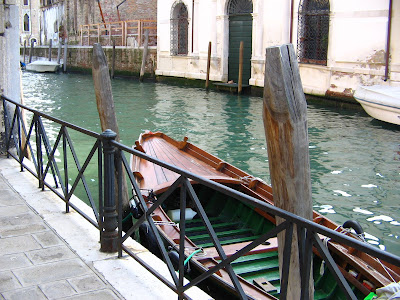 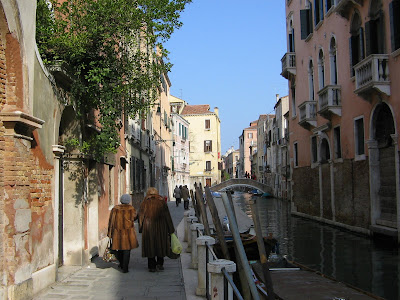 If I had more sense, I would see the world the way it truly is.

I would have more money in my encroaching old age.

But I am a Romantic.

Always the Show has carried more freight for me than the Biz.

You can only play the cards you are dealt.

Here is the upside:

You know what happiness is for me.

Strolling alone or with friends along the back streets of Venice.

The Madonna dell' Orto, the home of the great Tintoretto paintings - and a STOLEN Titian which has been represented for years by a color Xerox and a note - receives as many visitors in five years as the Basilica in San Marco has on an average morning. 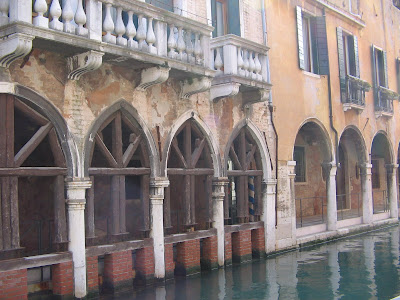 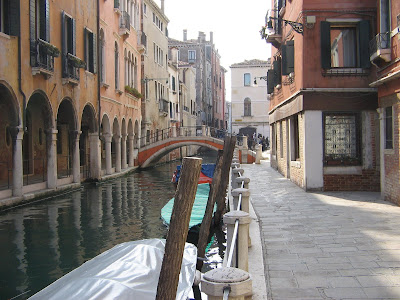 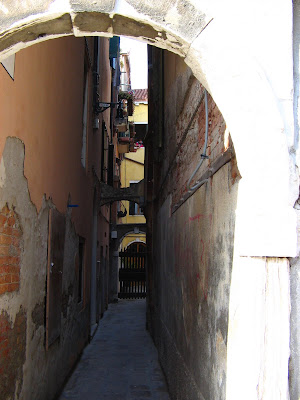 Posted by David Berner at 7:54 AM 3 comments: Links to this post 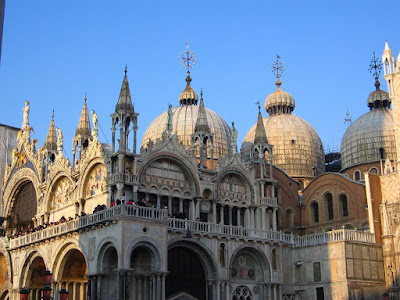 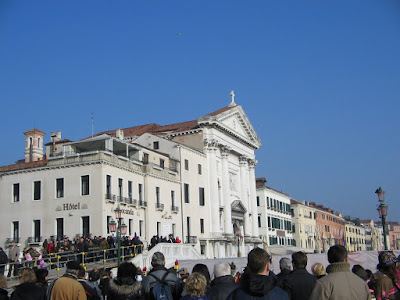 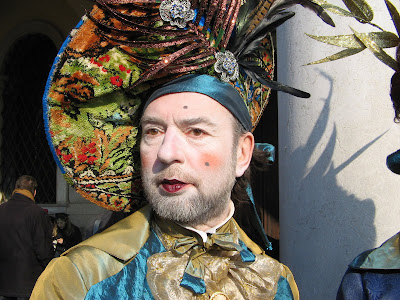 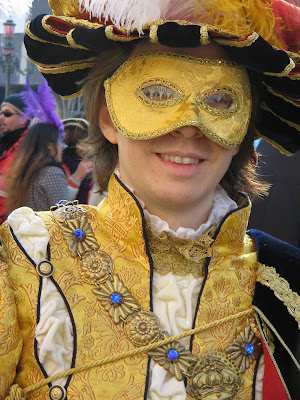 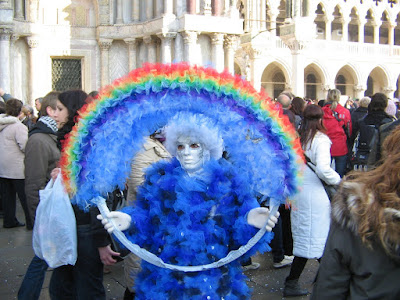 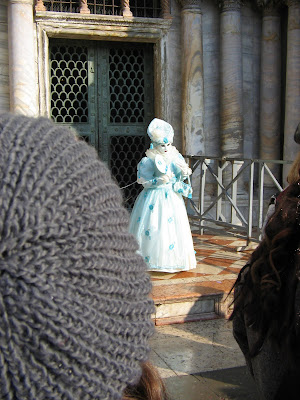 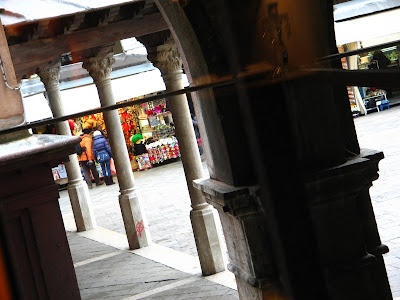 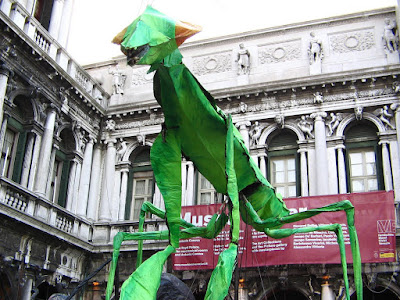 It is not the Invasion of the Giant Gnats,

It is just a creature in a far corner of the Piazza San Marco, scaring the little children and delighting all.

Il Gazzetino, the local newspaper, reported this morning that only 120,000 people arrived by bus yesterday for the last days of the annual Carnivale, approximately 119,000 of whom stepped on my feet and shoved from the front and the back and the side as we all strived to dance from point A to point B at a snail's pace in the narrow calles and streets.

It was the most exciting human contact I have had for months.

If you decide to stop for cafe, the view may look something like this the one at an angle looking out onto a tiny square near the fish market.

The scene has been madness.

It has been much less and much more than I expected.

Yesterday, San Marco was bursting with opera and cameras and children and drag queens.

The children are dogs or Spiderman or witches.

The cameras are all digital SLR's with enormous telescopic lenses. Everyone and her sister is posing as a famous foreign correspondent.

I have found it a great mistake, at least on my part, to smile approvingly at the drag queens, who in their fabulosy get-ups and heavy beards barely masked by their make-up take all pleasantries as a come-on. Ah well, it is always nice to be considered...

Historically, Carnivale was a grand excuse to indulge many passions, aided by outrageous covering disguises.

Is this still the case?

With the welcome and welcoming sunlight, the facade of the Pieta and the domes of the Basilica shine ever bright and beautiful.

Away from the crowds, Venice life continues at its stately pace.
Posted by David Berner at 9:11 AM No comments: Links to this post